A Salute to All the John Robert Monaghans

In the spring of 2008, I was on a photo assignment near downtown Spokane for one of our clients. We were shooting their employees in and around several locations, one of which happened to be the street median in front of the Spokane Club—near Monroe and Riverside. This location is the home of a tall bronze statue on a beautiful concrete base with the word MONAGHAN inscribed on it. Unlike the nearby Abraham Lincoln statue, this person doesn’t appear to be of the famous variety. 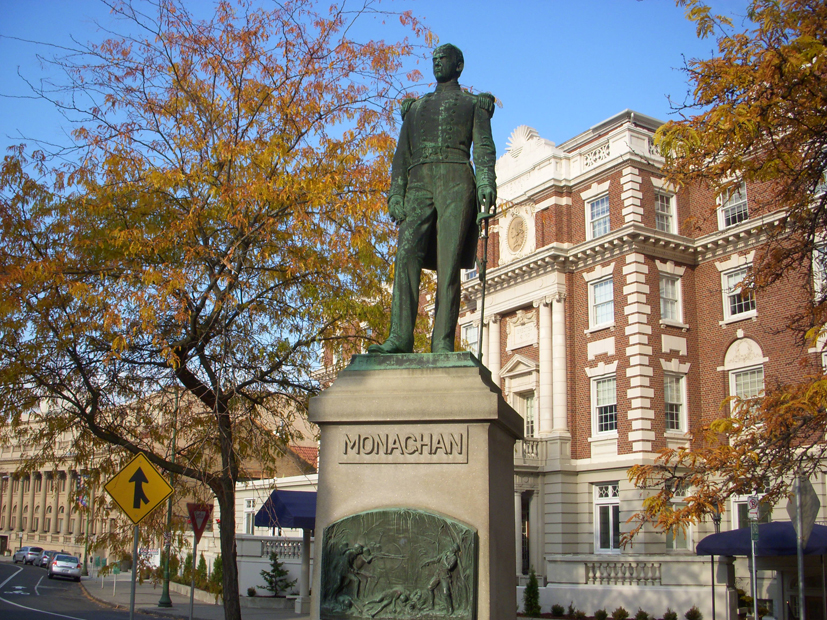 But that day, as we were preparing to shoot our subject, I read the words at the base of the statue: “During the retreat of the allied forces from the deadly fire and overwhelming number of the savage foe, he alone stood the fearful onslaught and sacrificed his life defending a wounded comrade lieutenant Philip V. Lansdale United States Navy.” For this act of bravery in 1899, U.S. Navy Ensign John Robert Monaghan was commemorated with a bronze statue in 1906. “Erected by the citizens of his native state,” it goes on to read.

But there’s more: Mr. Monaghan was born in my hometown, Chewelah, on March 26th, 1873. Surely, he must be the only native Chewelan with a statue in his honor.

I called my mom today to see what she knew about it. It turns out she’s been working on her church’s history, and told me that James Monaghan, John Robert’s father, donated the land where St. Mary of the Rosary Catholic Church and its former school reside—both of which I attended in my youth. So it would appear that I owe a great debt to this Annapolis graduate, not only for his heroic actions, but also for his family’s contribution that enabled the founding of Chewelah’s Catholic church in 1895.

So on this day, as we celebrate our veterans, let us not forget the men and women who have served – and continue to serve – our country. Those with statues, and those without.