This is the Manhattan office of Milton Glaser, Inc. 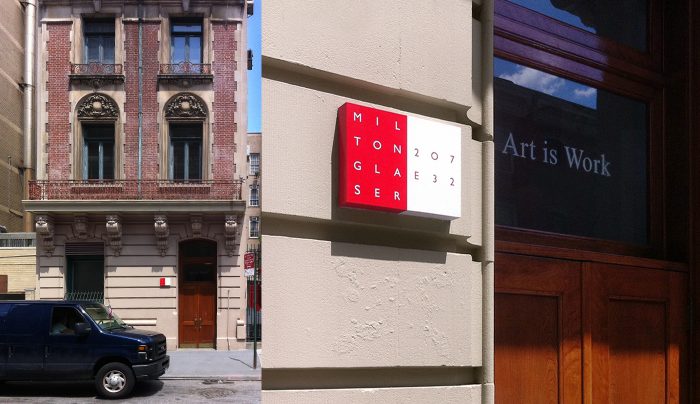 Just about every time we’d visit New York City, Linda and I made a pilgrimage to this place, stand across the street, and ponder what he and his team were working on. We never actually encountered Milton Glaser, but just seeing his four-story office building was inspiring enough.

The transom window over the entry reads “Art is Work.” Glaser believed in hard work. Persistence. A commitment to one’s craft. And his enormous talent provided the joy that kept him working right up until his death on June 26—his 91st birthday.

Once, when he was asked what he does all day, Glaser replied, “I move things around until they look right.” And he made his work “right” quite often. Best known for his 1967 Bob Dylan poster and the 1977 “I ♥ NY” logo, Glaser produced identity programs, book and album covers, packaging, signage, exhibit and environmental design, and countless posters. He co-founded New York magazine and authored three books about design. In 2009, he became the first graphic designer to receive the National Medal of Arts. And the list goes on. His contribution to graphic design is immeasurable.

While standing next to a stoop across the street from Glaser’s office, a neighbor told me he’d see Milton arrive in a black limousine late in the morning to start his day and see the car return to pick him up late in the afternoon. He was design royalty, after all.