Locals thought he was crazy. But Justo, writes Bremner, was simply “unwilling to submit to what most people considered normal.”

Reminds me a little of Salvation Mountain, just outside of Slab City, California. Here’s how it looked when I visited in 2018, four years after creator Leonard Knight’s death at 82 (not sure he would have approved of the constant stream of wannabe Instagram starlets posing coquettishly beneath the giant cross): 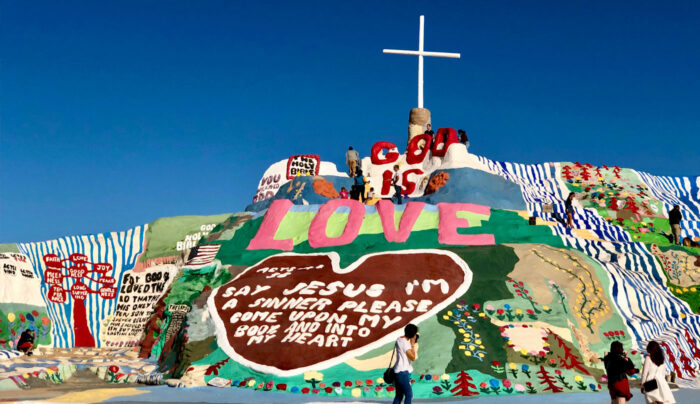 It’s funny how religious devotion, when associated with works like Salvation Mountain, Sagrada Família, and Justo’s homemade cathedral, is generally understood to be a product of mental illness—whereas Bach, who is known to have lived “a life of conservative Lutheran observance” (some three-quarters of his 1,000 works were composed for worship), is rightly considered a genius.

Is it because Bach didn’t approach the uncomfortable degree of fervor that’s so apparent with the others’ work? Or is it because covering straw bales and adobe with half a million gallons of latex paint isn’t actually art?

Despite the varying results, what drove these men—and countless others—was the same thing. And that makes their work all the more meaningful.