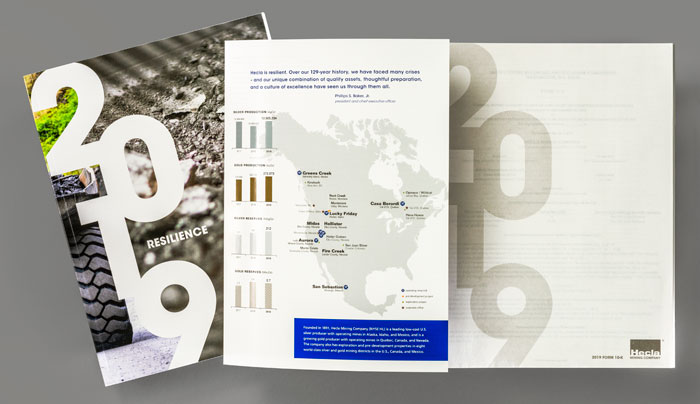 1988 was a big year. The Phantom of the Opera opened on Broadway. The Soviet Union collapsed. And at CERN, Tim Berners-Lee revealed his plans for what, a year later, would become the World Wide Web. Not to mention the relationship that was formed between a nearly 100-year-old mining company and a nascent Spokane design firm – a relationship that continues to this day. As a result, Hecla Mining Company’s 2019 annual report is the thirty-second consecutive for which helveticka provided creative direction, design, writing, and production services. Resilience – “a word that very much captures both the spirit of 2019 and the strength with which we entered 2020,” according to Hecla president and CEO Phillips S. Baker, Jr. – was the theme of the report, which focused primarily on a mid-year turnaround that led to a 93 percent increase in the company’s share price in the fourth quarter alone. It was a remarkable performance for Hecla, and another opportunity for helveticka to help communicate, through design, that performance to investors.