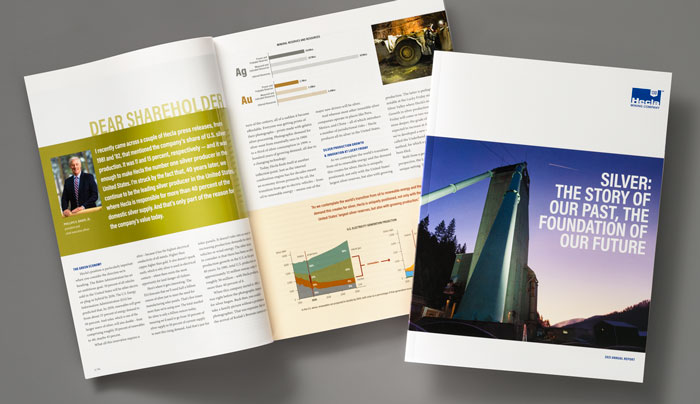 Hecla Mining Company was one of helveticka’s first clients. It’s a relationship that dates back to 1988, which makes Silver: The Story of Our Past, the Foundation of Our Future the thirty-fourth consecutive annual report helveticka has produced for the Coeur d’Alene-based company. The theme of the report is an acknowledgment of Hecla’s roots in Idaho’s storied Silver Valley while pointing to an increasing need for the minerals it produces as the world shifts to a greener economy. “Just as the internal combustion engine has for decades meant an economy driven primarily by oil,” writes Hecla CEO Phil Baker in the report’s letter to shareholders, “the transition from gas to electric vehicles – from oil to renewable energy – means one of the major new drivers will be silver.” And Hecla, the largest silver producer in the United States, he adds, “will continue to be there to provide for this demand.” helveticka provided creative direction, design, and writing services for the report.