I’ve poked fun at academic writing before; what I hadn’t realized is that my mockery comes from a deep-seated animus born of envy.

Be that as it may, there must be something to the charge that much of today’s academic writing is craptacular. Otherwise, we wouldn’t have this. 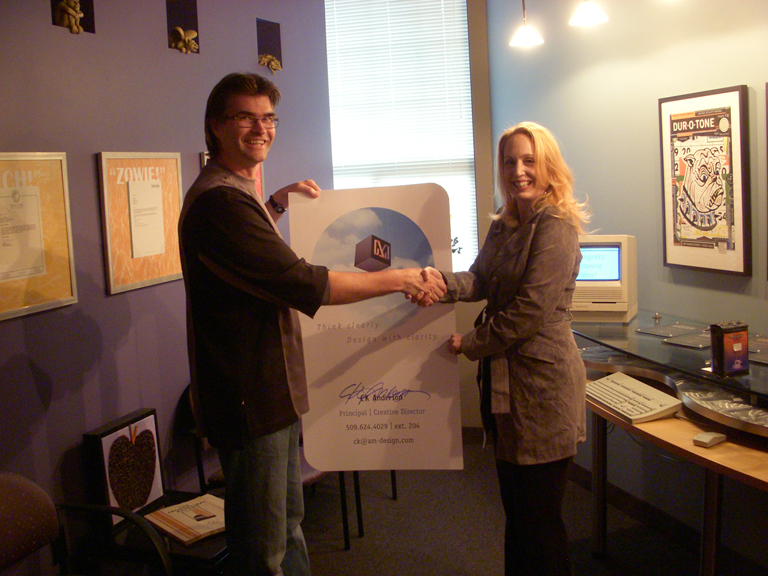 During her acceptance speech, Weise was pointed in her disapproval of bad writing. “Faith might save you from the bite of a timber rattler,” she said, “but it apparently can’t prevent random, inexplicable capitalization.”

Where Have All the Creative People Gone?

As I was thumbing the pages of “The Creativity Crisis,” an article in the July 10 issue of Newsweek,  I was surprised to run across a sample of a standard creative test for kids and adults. You simply draw something incomplete on a piece of paper, then give it to someone to complete using their imagination. A tiny scribble can become the Taj Mahal. This was a game I loved playing with my kids (especially in church).

According to the article, kids these days are less creative. Since the late 1950s, a standard of testing known as the Torrance test has been used to measure children’s creative quotient (CQ) score. A recent study suggests that since 1990, CQ scores have been falling, especially among the ages between kindergarten through sixth grade.

Why should we care? Well, according to an IBM poll of 1500 CEOs from around the globe, creativity is now the most important leadership quality for success in business—and because innovative thinking is a necessity in solving all kinds of local and global problems. As new studies come to light, our traditional thinking about left- and right-brain activities is also changing. In fact, it seems that both hemispheres of the brain are required to develop one’s ingenuity skills and that creativity can be nurtured.

Now I don’t feel so guilty about my Sunday scribbles.

As of this writing, no one has risen to the challenge issued here. There can be only two reasons for this: (1) nobody reads the last word, or (2) the reward offered to the winner is not enough to warrant the effort.

Since option no. 2 is clearly not within the realm of possibility, we are left to deduce that, in fact, nobody reads this blog. Which is a shame, really, given the wit and wisdom that fairly oozes from the screen.

In fact, where else where else would you discover that grunting can improve your tennis game? Or read about a “horse race” for women in bikinis? Or learn the ridiculously simple rule for forming a possessive?

So. In the unlikely instance that there is, in fact, some truth to the notion that the reward is somewhat…lacking, I’ve been authorized to sweeten the deal: I will personally call the winner and, using my radio voice, offer my heartiest congratulations.

It’s official: you’re reading the last word‘s hundredth post. At this rate, we should reach our hundredth reader in March of 2017.

How to celebrate? By smugly pointing out grammatical errors in a hand-written sign! Consider this one, taped to the altar of the Church of the Lord Jesus with Signs Following, Jolo, West Virginia: 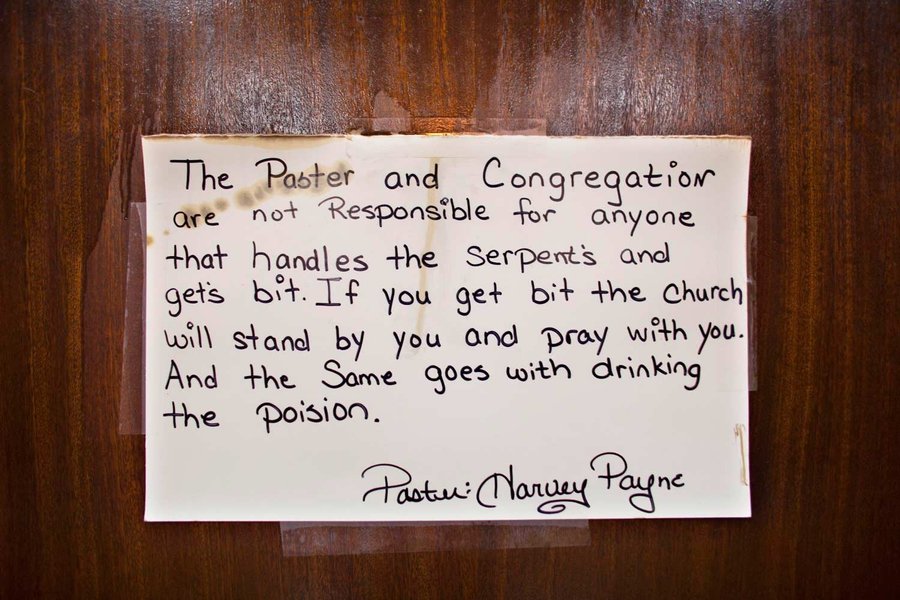 On second thought, I’ll simply point out that there are at least a dozen problems (grammatical, not theological) with this notice. Whoever correctly identifies the most—using the comments feature below—before 3 p.m. Friday, October 8 will win a complete set of FREE autographed AMD staff business cards!

How Narcissistic Are You?

Take the Narcissistic Personality Quiz today! I scored a big fat “0,” though, to be fair, it’s remarkably easy to manipulate the results.

In related news, it turns out that narcissists think they’re creative. Go figure. What’s most surprising about that little nugget is that it took a pair of psychologists—one from Cornell, the other from Stanford—to figure it out. A quick call to AMD headquarters would’ve saved them some time.

From the Department of Homeland Grammar

To a graphic designer, there are all kinds of interesting things about this story—upper- vs. lower-case letters, font selection, etc. But what really struck me was this line: “federal copy editors are demanding….”

Just think about that for a moment or two. Read it again. Now say it out loud.

There are positions in the U.S. government for copy editors? And they get to demand things? And people have to respond to those demands?

What an awesome country this is.

On the Dignity of Work

What I’ve long suspected—that American literature these days is dominated by a bunch of MFA-degreed Nancy boys who publish in prestigious literary magazines that nobody reads—turns out to be true, according to this essay by Gerald Howard.

Given my work history, which includes stints as a farm hand, construction laborer,  janitor, and Subway Sandwich Artisan™, it seems there really is no excuse for my inability to write a decent short story.

How Not to Write Criticism

As someone who once scraped together a modest living as a music critic, I found the premise behind this diatribe intriguing—until the whole thing quickly became predictable.

The author relies on a single criterion for determining if art is worthy of his esteem: whether he likes it. That’s all well and good, I suppose, except that he points to Damien Hirst—the hack whose “art” includes the suspension of dead animals in solutions of formaldehyde—as one who creates “art for the ages.”

Then there’s the tiresome adulation of the Beatles, the self-aware “to me, [insert popular fiction writer here] is light reading,” the tendentious claim that art has to blow his mind in order for it to be considered “good.”

Here’s a good rule of thumb for aspiring critics: drop the pretense before you write. Oh, and get out more.

Where Did You Go to Cropping School?

For years I’ve been asked the question, “Is it okay to crop a person’s forehead?” Maybe it’s time to shed some light on the subject of portraits and people cropping.

The short answer is, yes, it’s okay. In fact, there are no formal cropping rules whatsoever. The only guide I follow is doing whatever makes a person (or personality) more interesting and fits the required space. But some folks are under the impression that you should never crop out any part of a person’s head, hair, etc. That’s a valid approach—if the portrait is meant for the FBI’s “most wanted” list. Or if it’s for your daughter’s senior portrait in her high school yearbook, which no doubt required some serious mirror time and expense. The only other situation in which standard cropping is acceptable—well above the head, beyond the ears, and well below the chin—is when it’s for your ID badge or your driver’s license. But do any of us really expect those pics to be good?

I have no idea why this topic is so sensitive. But I’ve been asked to un-crop photos of some very important people (usually the client’s client, or the client’s boss), because I violated the driver’s license rule. To demonstrate my point, take a look at the pics below (with apologies for using yours truly as a subject—but this keeps it safe). So which one do you like? 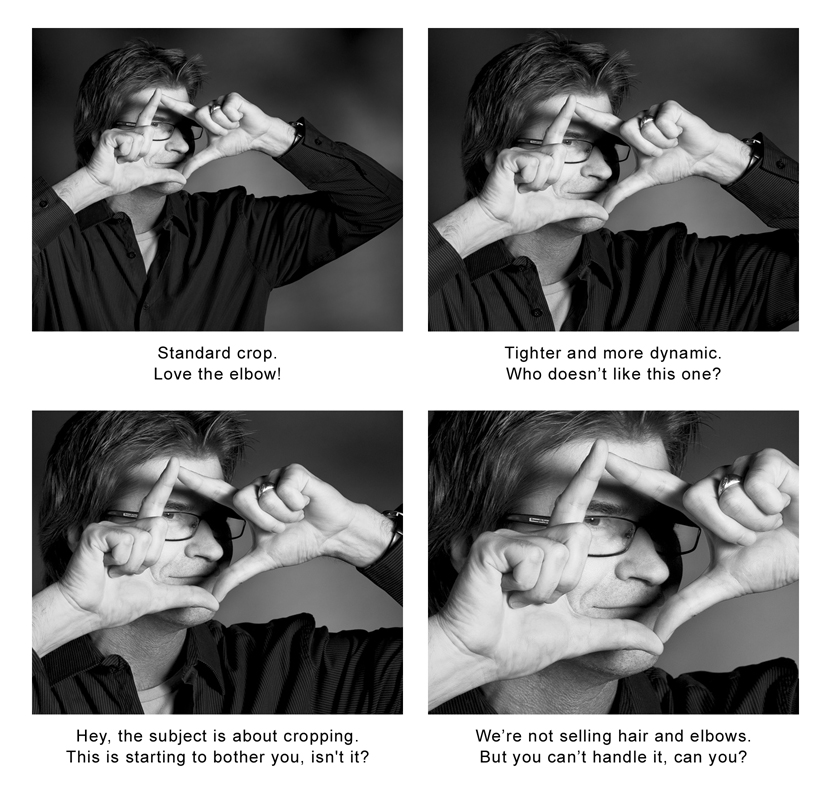 I’m normally not a fan of burning books, but I think I’d make an exception for The Associated Press Stylebook (“More than 2 million copies sold!”). That so many otherwise serious institutions continue to abide by its arbitrary and specious rules is a continual source of amusement to me; that so many adults are unable to write clearly due to its predominance in public education is an unmitigated disaster.

Form the possessive of singular nouns by adding ‘s. Follow this rule whatever the final consonant. Thus write,

Simple. Elegant. And easily understood by the reader. Contrast that with the AP’s instructions, which, in my 2004 edition, contain no fewer than five variations for singular nouns alone (out of sixteen total, including “nouns plural in form, singular in meaning,” “quasi possessives,” and “inanimate objects”).

As is the case with the serial comma, the AP is chiefly interested in saving space in newspapers—creating room for more advertising—rather than in its journalists writing something that can actually be read.

The Most Important News You’ll Read All Day

By way of apologizing for the lack of posting over the last week or so, I’ve decided that today is a day for fun and frivolity. To wit:

There now. We’ll be back to our regularly scheduled programming in no time.

In my career as a professional writer, few qualities have been so needlessly celebrated by those around me as consistency. At an advertising agency I once worked at, in fact, there was an account executive who insisted on repeating a printed grammatical error in all subsequent pieces—because to not do so would be inconsistent.

With that in mind, I offer up the following from Aldous Huxley: “Consistency is contrary to nature, contrary to life. The only completely consistent people are dead.”

Oh, to Be Normal

A couple of weeks ago I was visiting the Maryhill Museum of Art—worth the drive for the Rodin collection alone—and learned that Sam Hill, railroad executive and founder of the museum, had a rather intense friendship with Queen Marie of Romania.

I’m sure the museum’s collection of the queen’s royal memorabilia (coronation gown, crown, jewelry, etc.) is fabulous; the problem is, all that went through my mind as I toured the exhibit was this little ditty by Dorothy Parker:

Oh, life is a glorious cycle of song,
A medley of extemporanea;
And love is a thing that can never go wrong,
And I am Marie of Roumania.

I proudly recited the poem to each of my kids. One responded by rolling her eyes, the other by heading for the nearest exit.