Forget all the social and political baggage associated with pronouns these days: Bryan Garner has some thoughts on the subject that are definitely worth reading.

In fact, he argues that the use of the singular they is so ubiquitous these days as to be passé. “What’s new,” he writes, “isn’t the generic pronoun but the referential pronoun.…People are deciding for themselves how they want to be referred to behind their backs—in the third person.”

If you were addressing them directly, he points out, you’d just use you and your. But now “a social movement is behind the idea that people get to decide how references to them should sound when they’re absent.”

Things were so much simpler in the 70s.

This seems particularly appropriate for the last weekend in February (the worst of all the months, it’s only redeeming feature that it’s also the shortest):

“When besieged by doubt or depression, take a shower and change your clothes.” – Donald Justice

Best part about it? If you enable the camera on your device, the program uses motion capture to “simulate the gestural movements of playing a physical theremin.” (A word of caution: You might want to wait till you’re alone before enabling that camera.)

And yes, I spent an inordinate amount of time yesterday trying to perform the theme to Star Trek. I was not successful. But it did remind me that I’d read somewhere that there are actually lyrics, penned by Gene Roddenberry himself. My gift to you:

Beyond
The rim of the star-light
My love
Is wand’ring in star-flight
I know
He’ll find in star-clustered reaches
Love,
Strange love a star woman teaches.
I know
His journey ends never
His star trek
Will go on forever.
But tell him
While he wanders his starry sea
Remember, remember me.

*Well, except for 1, I suppose. But that feels like cheating. (Oh—and if exhaustive lists of the properties of specific numbers is your jam, Robert Munafo has you covered.)

No Book for You!

Call me naive, but I certainly didn’t see this coming: Little Free Libraries are apparently a Bad Thing™—and the critique is coming from galaxy brains who think that people like you and me will confuse all those cutesy little book boxes on fence posts with…real libraries.

The argument started on Twitter (where else?), in a kerfuffle that “often came down to the question of localism vs. state support: the benefits of communities acting together for themselves vs. the economies of scale and resource redistribution provided by a tax-funded national network of libraries.”

And the reason the argument was never resolved? Because”it actually expresses a fundamental contradiction within capitalism itself.”

Hoo boy. I know we live in some weird times right now, but who’d a-thunk Marxists would be the ones complaining about free stuff?

Usually, when I come across a story that purports to show how an underrepresented group was really responsible for the successful development of [fill in the blank], I roll my eyes Liz Lemon-style and move right along. But here’s a case where it’s absolutely true: the pioneers of electronic music were women. And what they accomplished quite literally changed the musical landscape of the 20th century.

But even if girl power isn’t your thing, I encourage you to catch the film Sisters with Transistors when it’s released this spring. It promises to be a fascinating look into an untold story—and, as a devoted connoisseur of the work of Laurie Spiegel and Suzanne Ciani in particular, I’m excited to see it finally brought to light.

In the meantime, feast your eyes on this relic of 1970s daytime television (and be sure to stick around for the part where the real Robert Moog demonstrates his Minimoog analog synth):

The Scientific Mind at Work

In 1838, then-29-year-old Charles Darwin prepared a list of pros and cons around the question of marriage.

On the plus side of the ledger, he wrote, “My God, it is intolerable to think of spending one’s whole life, like a neuter bee, working, working, & nothing after all.” (Lest you think that Chuck was a hopeless romantic, however, keep in mind that he also wrote that a “nice soft wife” would be “better than a dog anyhow.”)

On the minus side? “Not forced to visit relatives,” “cannot read in the Evenings,” “fatness & idleness” [presumably his own], and “less money for books &c.”

Can’t really argue with his reasoning—especially since he ultimately came down in favor of matrimony. Sure, he ended up marrying his cousin, but still.

Social media isn’t entirely terrible. If you can manage to steer clear of political tribalism and its associated posturing and virtue signaling—no mean feat, that—you occasionally find some real gems. Like, say, this:

Wendy Carlos demonstrating how to create electronic music in 1970. via @BBCArchive pic.twitter.com/MEGXkxB4g1

And then there’s this, which, to be honest, I would never have imagined possible:

Finally tracked down the 1986 episode of SNL with the Philip Glass Ensemble as musical guest!

And if that isn’t weird enough for you, behold:

Also, for those who don't know, Radiohead did a decent cover of "Rhinestone Cowboy": https://t.co/PHmDFkkl6q

“You’ve been hoaxed,” writes Angus Fletcher. “Computers can’t grasp the most lucid haiku. Nor can they pen the clumsiest fairytale. Computers cannot read or write literature at all. And they never, never will.”

Remember this? Reckon it could be applied to certain English departments?

“We are constantly told to ‘trust the science.'” writes Suman Seth, “but what does that mean if we cannot quite tell where or what the science is?”

On the history of remote viewers, “which go back further than you might guess.”

You’ll have to forgive me for all the depressing death posts of late, but I couldn’t not say something about the legendary pianist Chick Corea, who died Tuesday from a rare form of cancer. He was 79.

No matter what his creative output—whether it was the work with Miles Davis in the late 60s, the duets with vibraphonist Gary Burton, the jazz-rock explorations with Return to Forever, or the late-80s Elektric Band—Corea had a profound influence on the development of my musical vocabulary.

I was in Paris in the summer of 1989. My friend Tom and I had just spent several hours exploring the Louvre, and needed some time to process the fact that we had just been in the presence of the Mona Lisa, the Venus de Milo, and the Winged Victory of Samothrace.

Emerging from the museum and squinting into the late afternoon sun, we set our sights on the Place de la Concorde, less than a mile distant. (Having been to Notre Dame that morning, it made sense to us to head in the opposite direction.) We had just entered Tuileries Garden when we heard the sound of a piano—a sound that, though faint, was familiar to both of us.

Tom and I followed our ears until we came across a small crowd of spectators gathered in front of a portable stage. And on that stage, practically within spitting distance, was Chick Corea, performing with bassist John Patitucci. It was one of those magical moments that seems, in retrospect, too far-fetched to be true.

We watched the remainder of the set, marveling not only at the musicianship on display, but also at the relative indifference of the crowd. Parisians, I thought. They’re too cool even for Chick.

I got a text from Tom late last night. He asked if I remembered that afternoon.

How could I forget? Rest in peace, Mr. Corea.

“Enough with all the words,” I imagine most of you saying every time I post something. “Give us something cool to look at.”

The winners of this year’s Underwater Photographer of the Year competition have been announced.

At the End of the Day, It Is What It Is

The results from a 2019 GetResponse survey, which polled 1,000 employees to determine the worse offenders in the category of business jargon, are in: 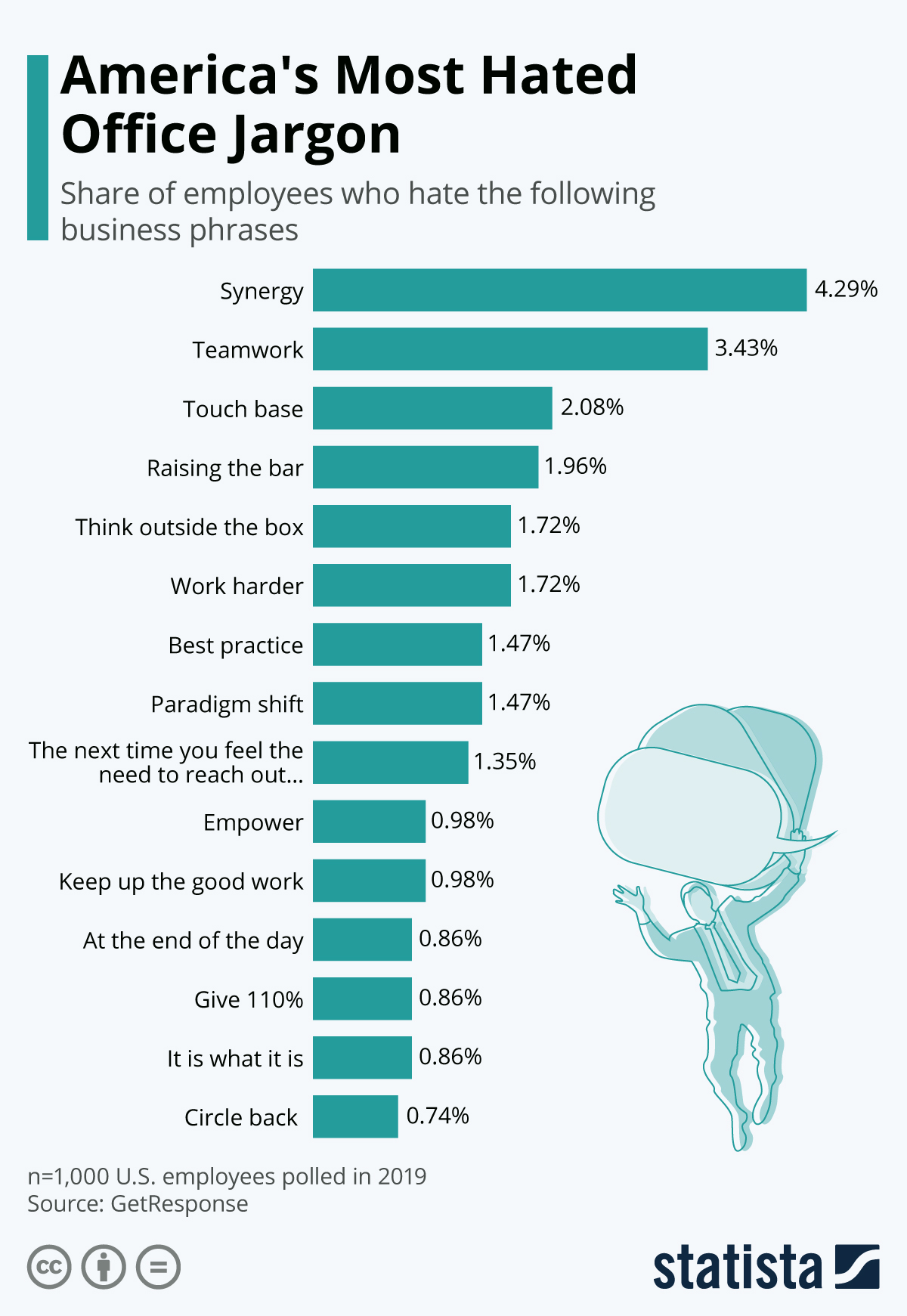 And while synergy is indeed a loathsome word, there’s a phrase I keep seeing that’s far, far worse—yet it doesn’t even appear on the list: lean in. By my troth, if you utter these words within thirty feet of me, you shall surely taste my wrath.

I know we’re supposed to remember Hal Holbrook for his portrayal of Mark Twain during the six-decade run of his one-man stage show—or even for playing Deep Throat in All the President’s Men—but when I learned that Holbrook died a couple of weeks ago, all I could think of was Into the Wild, the 2007 film based on Jon Krakauer’s book of the same name.

The missus and I rewatched the movie over the weekend. And the two scenes that still bring a tear to my eye are due entirely to Holbrook’s performance as the lonely widower Ron Franz. Here’s one of them:

If you’ve not seen the film, I can’t recommend it highly enough. Great acting, brilliant direction, beautiful cinematography, and, as if all that isn’t enough, some truly great songs performed by Eddie Vedder.

As for the story itself, forget what you may have heard—particularly from those who seem intent on deliberately missing the point—and watch it because it’s, as Anthony Sacramone once suggested, “a prose poem on the beauty of life for its own sake, despite its pain and disappointments” and “a poignant plea for humility and forgiveness.”

When Duke Bootee died last month, he left us with not only “the greatest song in hip-hop history” (according to Rolling Stone)…

…but also some of the sagest advice I’ve ever come across: “Figure out a way to take care of yourself, legal. Find somebody you can stand that can stand you. Pay your taxes. Take care of your teeth.”

Good news: “Pharmaceutical giant Johnson & Johnson said Thursday it has applied to the Food and Drug Administration for an emergency use authorization for its one-dose Covid-19 vaccine, setting in motion a process that is all but sure to see a third such vaccine authorized.”

Bad news: “FDA scientists will now pour over the data generated in the various clinical trials J&J has conducted on the vaccine.”

Pssst: It’s pore over, nerds. As in “to scrutinize.” But hey, I’m no scientist. Maybe something actually gets dumped on the numbers during the approval process. Which, now that I think about it, explains an awful lot.